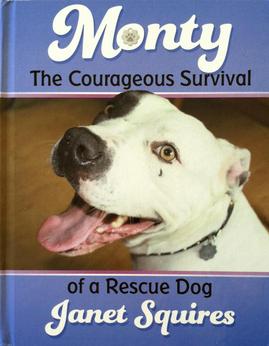 A portion of every sale is donated to Animal Welfare.

MEET MONTY -- A remarkable rescue dog with an international following.  From his guardians to his doctors, Monty's loving spirit captures hearts with an I-can-do-it grin and a wagging tail.

Abused, shot and left fo​r dead in the desert, Monty is taken in by dedicated animal rescuers who launch an eighteen month long campaign via social networking that saves his life and makes him a world-wide celebrity with thousands of fans.

A year and a half later -- after losing a leg, Monty, now healthy and happy, finds a loving forever home, becomes an ambassador for other abused and abandoned dogs, and inspires everyone who hears his story of second chances and never giving up.